Wellington The Mikado star Jonathan Abernethy is his own wandering minstrel 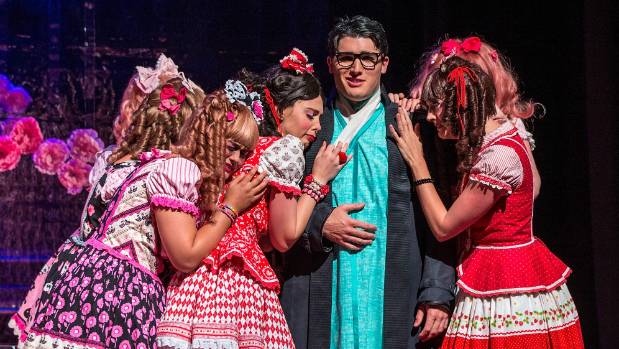 When it comes to Wellington College old boy Jonathan Abernethy and his latest role in NZ Opera’s The Mikado, the two have a bit in common.

Sure, Abernethy isn’t the son of a Japanese ruler, promised to marry to the court’s resident cougar while his heart belongs to a girl named Yum-Yum.

But when it comes to living life as a bit of a wandering minstrel – Abernethy knows a thing or two.

Ask the tenor where home is at the moment, and you’ll receive a few “ums” and “ahs”.

Abernethy, majored in IT and Business at Victoria University Wellington, before trying our for the New Zealand Singing School.

“I’ve got no real homebase at the moment, I’m sort of on the road for a while, but I am from Wellington.”

At the moment, home means a series of hotels, as he performs The Mikado in Wellington this weekend and following on to Christchurch.

After that, he flies to Sydney to perform with Opera Australia, before heading to France to perform at the coveted Festival d’Aix-en-Provence music festival.

It’s a non-stop lifestyle for the 28-year-old, who in 2015 embarked on six months of studies abroad, participating in a number of festivals and opera programmes in Italy and Chicago and training under opera superstar Kiri Te Kanawa in London.

But life as an internationally touring opera singer wasn’t always on the cards for the Abernethy, who majored in IT and Business at Victoria University. 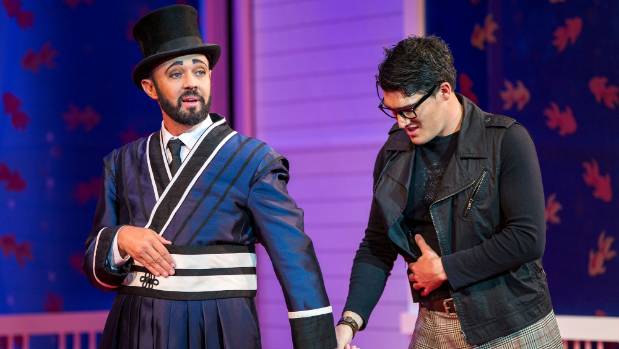 When he took singing lessons for extra credits, his singing teacher recommended he try out for the New Zealand Singing School.

Abernethy was quickly snapped-up by Opera Australia’s Young Artist Program in 2012, with whom he has performed in several productions, but none quite like Arthur Sullivan’s The Mikado, he says.

“While it is a romantic lead, and that’s my gig, it’s very different to the other roles I’ve done.

“The Mikado is definitely not a traditional opera – it’s so much fun. It requires a large skill set with dancing and dialogue and it’s horrendously funny.

“The tunes are easy, happy, fun tunes that get stuck in your head.”

While he admits the storyline is difficult to explain in a nutshell, and at times a tad madcap, he says the story becomes “crystal clear” for the audience.

“The text is fantastic and the whole way along the audience is drawn into this absurd reality and ridiculous bureaucracy.”

In response to recent reports that The Mikado could reignite debate concerning cultural appropriation in entertainment, Abernethy recommends that people see the show and decide for themselves.

“I think if people are worried about that, they need to come and see what it is and not make assumptions.

“The play is more about British culture. Like with a lot of opera and music of that time, for 19th century composers it was at places like world fairs that they saw completely different cultures and ways of life that they otherwise would never have been exposed to.

“Nowadays, the internet gives us access in an instant, but back then when people were drawing inspiration for music and theatre, that’s the kind of places where it came from.

“There was also safety in setting the play in other countries. Back then, the powers that be could throw you in jail for some commentary on the political situation in Britain, so setting it in Japan, or Italy, or France or Spain was a way to get around this.

“Ultimately, I think people need to come and form their own opinion.”

As well as the dialogue, humour and dancing being relatively new for Abernethy, so is singing in English. Despite what you may think, it’s actually more difficult.

“The vowels are not always ideal. Sometimes you get English translations that are far too up to date, or not up to date enough, and when you forget your words, which does happen, it’s very hard to cover it up.”

It hasn’t happened in The Mikado yet, but that doesn’t mean to say the season, which kicked off in Auckland, hasn’t had the odd hiccup.

“We’ve had some very funny things happen on stage where things have gone slightly askew, but it just makes the scene even better.

“On opening night, I was sitting in my dressing room and I had this feeling something was going to happen with this dagger I had for a scene. I walk out and instantly performed the happy dispatch and thought my mind was playing tricks on me, the handle was in my hand and the blade still in my belt.”

In that same scene on a different night, there was a hiccup with the safety mechanism on a noose prop, but nothing serious.

“There’s just something about that scene, but it’s okay, the audience laughs even more.”